Senate parliamentarian, Elizabeth MacDonough, has warned Republicans that a key provision in their healthcare reform bill related to abortion is unlikely to be allowed, raising a serious threat to the legislation, The Hill reports. 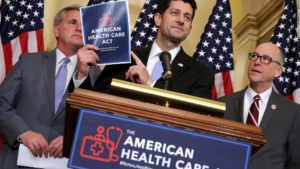 MacDonough has flagged language that would prevent people from using new refundable tax credits for private insurance plans that cover abortion, according to Senate sources.If Republicans are forced to strip the so-called Hyde language from the legislation, which essentially prevents federal funds from being used to pay for abortions unless to save the life of a mother or in cases of rape and incest, it may doom the bill, The Hill comments.

Nevertheless, conservative senators and groups that advocate against abortion rights are likely to oppose the legislation. Republicans control 52 seats in the Senate. Thereof, they can afford only two defections and still pass the bill, assuming Democrats are united against it.

Controversial legislation usually requires 60 votes in order to be adopted by the Senate, but Republicans hope to pass the ObamaCare replacement bill with a simple majority vote under a special budgetary process known as reconciliation.

Moreover, the legislation must pass a six-part test known as the Byrd Rule, and it’s up to the parliamentarian to advise whether legislative provisions meet its requirements.

The abortion language that conservatives want in the healthcare bill may run against a precedent set in 1995, when then-Senate Parliamentarian Robert Dove ruled that an abortion provision affecting a state block grant program failed to meet reconciliation requirements, according to a source briefed on internal Senate discussions.

One Republican source identified the objection to the Hyde language along with Republican infighting over how to cap ObamaCare’s Medicaid expansion as two of the biggest obstacles to passing a bill. A Republican senator confirmed that negotiators have wrestled with the procedural obstacle facing the anti-abortion language.

One possibility would be to change the form of assistance to low-income people by changing it from a refundable tax credit to a subsidy filtered through an already existing government program that restricts abortion services, such as the Federal Employee Health Benefits program or Medicaid.

Republican negotiators picked up the pace of their discussions with the parliamentarian after the Congressional Budget Office released an updated score for the House-passed bill in late May. If GOP leaders are forced to strip the Hyde language from the healthcare bill and cannot find an alternative way to seal off insurance tax credits or subsidies from abortion services, they would lose the support of anti-abortion rights groups, a devastating blow, The Hill concludes.