A top Democrat on the House Rules Committee is calling for multiple federal investigations into a report that Republican representative Chris Collins told GOP lawmakers they could make lots of money by investing early in his Australian biotech company. 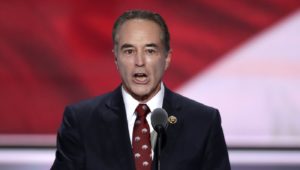 In separate letters sent Thursday, Democrat representative Louise Slaughter urged the Securities and Exchange Commission, Justice Department, House Ethics Committee and the Office of Congressional Ethics (OCE) to launch probes into what is described as a “major stock trading scandal among House Republicans.”

The Hill reported Thursday morning that Collins, the largest shareholder and board member of Innate Immunotherapeutic, had told some fellow Republican colleagues on Capitol Hill that if they “get in early” they can make “big profit,” according to one lawmaker. He also told another group that he had made money for some of his fellow lawmakers after tipping them off to the Innate stock.

Collins, one of Trump’s top allies on Capitol Hill, has denied any wrongdoing, saying that he never encouraged anyone to buy Innate stock, and he denied bragging about making money for lawmakers.

“The story today is truly shocking and makes it clear that some members of Congress are embroiled in a major stock trading scandal that violates the public trust and likely the law. The public needs to be able to trust we are working on their behalf and are not out to enrich ourselves”, Slaughter wrote in a statement.

Collins is already facing a congressional ethics investigation over allegations of insider trading related to comments he made in the Capitol that he had made many “millionaires” in Buffalo.

According to Slaughter’s statement, The Hill story “bolsters allegations of insider trading by Collins and a growing number of Republican colleagues and confirms that Collins used taxpayer-funded government resources for personal gain, a clear violation of House rules”. Both Slaughter and Collins represent neighboring congressional districts in western New York.