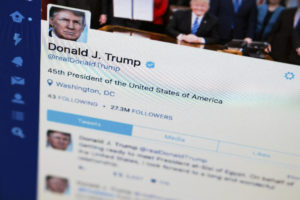 In the wake of the highly anticipated Senate Intelligence Committee hearing, speculation was running high whether the President would tweet. However, Trump remained silent during Comey’s three-hour testimony.

Trump’s response came through his attorney Marc Kasowitz, whom he hired last month to help him navigate the controversies and potential legal threats of the FBI’s investigation into Russian election interference.

“Kasowitz was able to persuade the President that he would not give a Washington-style, tepid defense. Trump’s big charge with his staff is that they don’t defend him aggressively. And Kasowitz convinced him that not only will I defend you, but I will attack Comey where there’s room to”, a top Republican close to the White House told the Washington Post.

Kasowitz rejected Comey’s claims that Trump once asked him for a pledge of loyalty and pressed him to end the agency’s investigation into former national security adviser Michael Flynn. But he embraced Comey’s acknowledgement that he told Trump three times that he was not the subject of an investigation.

Trump had a quiet morning on Thursday. During the day he had a meeting with national security adviser H.R. McMaster, Secretary of State Rex Tillerson and Defense Secretary James Mattis, a move that can be perceived a potential distraction from Comey’s testimony on Capitol Hill.