According to federal prosecutors, the government contractor accused of sharing National Security Agency (NSA) documents with a media outlet, may have had plans to leak more classified information. 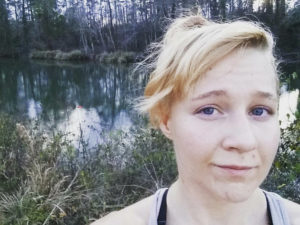 In a Georgia court, Assistant U.S. Attorney Jennifer Solari said that 25-year-old Reality Leigh Winner referred to “documents”, in plural, according to NBC News. She added that federal agents were examining whether Winner may have allegedly stolen other classified information while working with the NSA.

Winner pleaded not guilty to one count of “willful retention and transmission of national defense information” during her detention hearing Thursday. NBC reports that Winner was denied bail and that she said nothing as she was taken to detention.

The prosecution also stated that agents found two notebooks in Winner’s home following her arrest, in which she wrote that she “wants to burn down the White House”.

Before the hearing, Winner’s stepfather, Gary Davis, told the Associated Press that she is “not a flight risk”.

“Everyone in America knows what she looks like at this point. She’s never run away from anything in her life. She’s not a violent person. She has no record. There’s no reason to hold her”, he added.

On Monday, prosecutors announced that they had charged Winner with sharing top-secret material with a media outlet. Court documents submitted by the government did not specify what outlet received the material, but that news outlet is widely believed to be The Intercept, which published a report Monday detailing an apparent NSA document that said Russian military intelligence attempted to hack a U.S. company that provides election software.

A top Democrat senator later said that Russia’s election interference was “much broader” than reported.

Winner was arrested last weekend after the FBI obtained a warrant to probe her home in Georgia. The contractor worked for Pluribus International Corporation and she had started to work for a government agency in Georgia in February.

If convicted, Winner faces a maximum sentence of 10 years in prison and/or a fine of up to $250,000, according to court documents. She is the first person to be criminally charged with leaking classified information under the Trump administration, which has vowed to crack down on leaks.