The White House is set to ramp up infrastructure efforts next week, to show progress on the $1 trillion rebuilding package, which President Donald Trump broadly outlined in his budget proposal last week, The Hill Reports. 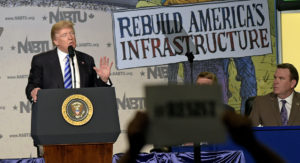 Work on the infrastructure proposal has been ongoing for several months, and this week will mark the administration’s most public effort to present Trump’s plan to stakeholders, lawmakers and the public.

The full legislative package won’t be unveiled until later this summer, and in the meantime, the Trump administration will start to reveal more details about the proposal.

Meanwhile, Trump is to sign a list of formal “legislative principles” in the oval office related to air traffic control reform, which will be further submitted to the Congress.

Following its approval, the President will present his remarks regarding the separation of air traffic control from the federal government – an idea that has been billed as a way to speed up modernization efforts, but one that has run into a buzz saw of opposition on Capitol Hill.

While Trump already supported the spin-off proposal in his budget request, the signing of principles will serve as the clearest signal to date about how serious he is about putting some muscle behind the long-stalled effort.

Although the White House plans to move air traffic control reform separately from the $1 trillion infrastructure package, officials have said that it’s up to Congress how to tackle both initiatives.

The package, which will use $200 billion to leverage $1 trillion worth of overall investment through private sector involvement, is expected to address a wide range of transportation projects, including veterans hospitals, energy and broadband.

On Thursday, the White House will also host a listening session with governors and mayors from all around the country in an effort to exchange ideas about how best to partner on infrastructure improvements.