Insurance commissioners are struggling to retain insurers by offering new flexibilities amid uncertainty over ObamaCare’s future. 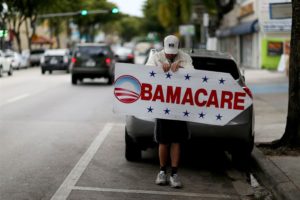 Insurers are pleading for certainty from Washington, expecting reassurance of any kind that they will continue to receive cost-sharing reduction payments from the federal government, which amount to $7 billion this year.

However, no guarantees are coming from Washington at the moment, prompting insurance commissioners to try and hold things together with later filing deadlines for enrollment and new concessions to insurers.

“As a regulator, instead of being rigid on timelines, the type of pricing I’m going to want, I’m being more open about this. I’m trying to be more flexible to give them confidence that if things change, we as regulators will be flexible with them”, said John Franchini, New Mexico’s insurance superintendent.

Insurance commissioners are fearing that carriers will pull out of a market, leaving people with no ObamaCare plans to buy. This hasn’t happened before, but could happen this year.

In several states, such as California, companies can file two different sets of premium requests: one for the continuation of ObamaCare — as cost-sharing reduction payments and the enforcement of the individual mandate — and one for if both are discontinued.

“Based on what we were hearing from insurers, we anticipated Trump rates would be double-digit increases over the past year. I wanted to give insurers the opportunity to file rates based on Trump”, Dave Jones, a California Insurance Commissioner said.

Insurance companies are facing imminent deadlines in many states to submit their preliminary premium requests and to state whether they’ll stay in the market. They also face a June 21 deadline to tell the federal government if they’ll participate in ObamaCare next year.

According to the National Association of Insurance Commissioners, some states could look to follow the lead of Alaska, which is creating its own reinsurance program. The programs usually involve a mix of state and federal money to help subsidize insurance companies’ payments on high claims, and this type of state-based arrangement is popular with the Trump administration.