US Supreme Court is giving the challengers to President Donald Trump’s travel ban more than a week to respond to the government’s emergency request to let the executive order take effect, Politico reports. 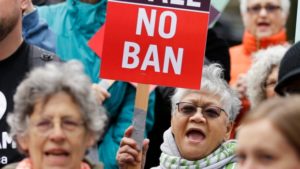 The deadline expires June 12 at 3pm. Thus, the Supreme Court will further decide whether it will allow the revised controversial executive order — which blocks entry from six Muslim-majority countries — to go into effect.

Last Thursday, the Trump administration has asked the Supreme Court to reinstate the ban on travelers from six Muslim-majority countries, a bill that has been repeatedly blocked in the lower courts. The document argues that a federal appeals court in Richmond, Virginia, made several errors last week when it upheld a federal judge’s decision to block the executive order.

“The President is not required to admit people from countries that sponsor or shelter terrorism, until he determines that they can be properly vetted and do not pose a security risk to the United States”, Attorney General Jeff Sessions said last week, adding that Trump’s executive order “is well within his lawful authority to keep the nation safe”.

Back in January, Trump signed an executive order banning travelers from Iran, Libya, Somalia, Sudan, Syria and Yemen, as well as Iraq, for 90 days, which triggered panic, chaos and protests at airports across the US and the Middle East.

A week following its introduction, the ban was blocked by several federal courts, leading the Trump administration to revise it. The updated ban then removed Iraq from the list of affected countries and removed an indefinite ban on Syrian migrants. That ban was also blocked before it could go into effect, first by a district court in Maryland and then by the Fourth Circuit Court of Appeals in Richmond.