Defense Secretary James Mattis and numerous other US lawmakers addressed allies concerned about US policy in the South China Sea region this week. 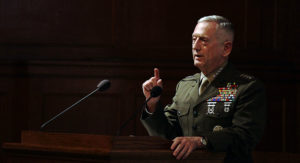 Mattis in Singapore vouched for the US commitment to Asia-Pacific nations, as the region struggles to address the growing threat of North Korea’s advancing missile program and China’s militarization, The Hill reports.

Senior director of the Asia-Pacific Security Program at the Center for a New American Security Patrick Cronin, underscored that “this is not an easy time for senior US officials” to convey a strong case for American’s strength and commitment to preserve peace.

“While competition between the US and China, the world’s two largest economies, is bound to occur, conflict is not inevitable. Our two countries can and do cooperate for mutual benefit. We will work closely with China where we share common cause”, said Mattis on Saturday at the Shangri-La Dialogue — a Singapore-based security summit that includes more than 500 delegates from 32 countries.

The remarks come following the latest ballistic missile test conducted by North Korea on Monday, which is the third in three weeks, and threats to continue to pursue an aggressive testing schedule with its missile program. According to Mattis, North Korea’s accelerated push to create nuclear weapons and intercontinental ballistic missiles is “a threat to all.”

“As a matter of national security, the United States regards the threat from North Korea as a clear and present danger,” Mattis said.

Furthermore, the Defense Secretary said the Trump administration is encouraged by China’s commitment to cooperate with the United States and other countries in tackling North Korea’s nuclear program. However, he expressed concerns over China’s “indisputable militarization” of man-made islands in the South China Sea.

Mattis’s second visit to Asia since becoming Defense Secretary in January, coincides with several other congressional trips to the region.

McCain asked for patience and commitment to America, pointing to a China’s expansion and aggressive behavior in the South China Sea, though he said he knows some of Trump’s actions have “unsettled America’s friends.”

“I realize that I come to Australia at a time when many are questioning whether America is still committed to these values. I believe that Australia, and our other allies and partners can still count on America. Our foreign friends always tend to focus on the person in the White House. But America is far bigger than that”, McCain said at the US Studies Center at the University of Sydney.