Most of Americans disagree with President Donald Trump’s decision to withdraw from the Paris Agreement, majority saying that the move will damage the United States’ global leadership, a new Washington Post-ABC News poll shows. 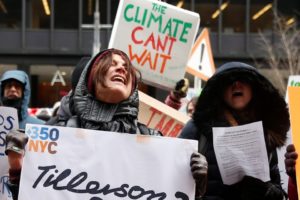 According to the poll, 59 percent oppose, whereas 28 percent support the decision. The reactions are also divided along partisan lines, with a 67 percent of Republicans supporting Trump’s action, and only 8 percent of Democrats doing so.

The poll also finds skepticism toward Trump’s argument that leaving the Paris climate agreement will benefit the U.S. economy. About 32 percent of respondents say the move will help the nation’s economy, 42 percent think it will hurt the economy, while 20 percent say it will make no difference.

Trump’s decision to exit the landmark Paris climate accord, signed by more than 190 countries, drew criticism last week from U.S. allies, major companies and mayors of numerous U.S. cities, all of whom stated their commitment to what they called the necessary task of combating climate change.

Trump argued that the Paris Agreement imposed “draconian financial and economic burdens on our country” and predicted it would cost Americans millions of jobs and the U.S. economy trillions of dollars, The Washington Post reports.

Trump’s statement was quickly outlined by critics for not considering the health benefits from cutting emissions and the potential economic benefits of investments in clean energy.

The Paris deal essentially represented a promise by countries to hold the planet’s warming to “well below” 2 degrees Celsius above preindustrial levels, and to aspire to a 1.5-degree limit if possible, in an effort to stave off the worst effects of global warming. Under the deal, countries would set their own targets for reducing their emissions, with the aim of increasing the ambition of their targets over time. The United States, for instance, had agreed to cut greenhouse gases to 26 to 28 percent below 2005 levels by 2025.

With Trump’s decision to pull out from Paris climate accord, the United States is abandoning its role as a global leader in the fight against climate change and instead joining only two other countries not participating in the accord: Syria, which is in mired in civil war, and Nicaragua, which refused to join because its leaders said the Paris deal did not go far enough to combat global warming, The Washington Post states.