White House budget chief Mick Mulvaney apologized Friday to a Congressional Budget Office (CBO) analyst, stating that his criticism of the group should have targeted the director, because as he said “it is the Director who bears the ultimate responsibility for reports delivered by the non-partisan organization”. 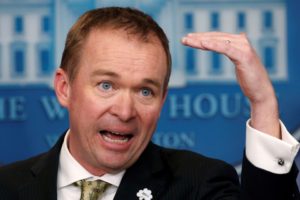 Mulvaney had come under heavy criticism from Democrats and several former CBO directors after suggesting earlier in the week that the CBO’s top health analyst, Holly Harvey, held political biases reflected in the group’s reports.

Several former CBO directors had also criticized Mulvaney’s comments including Douglas Holtz-Eakin, who served as an adviser on Senator John McCain’s 2008 GOP presidential campaign. Holtz-Eakin tweeted that Mulvaney’s words “are a disgrace, reflect more poorly on him than CBO, and show budget ignorance. Should apologize.”

In 2015, Hall has tapped to head the CBO by Republican leaders, including former Budget Committee Chairman Tom Price (R-Ga.), who is now President Trump’s Health and Human Services secretary.

Mulvaney and Republicans have been critical of the CBO after the group concluded that the Republicans ObamaCare repeal bill would leave 23 million more people uninsured by 2025.

The White House budget chief decried that prediction this week, with suggestions that Harvey, who previously worked in the Clinton administration, was an unreliable scorekeeper.

“If the same person is doing the score of undoing ObamaCare who did the scoring of ObamaCare in the first place, my guess is that there is probably some sort of bias in favor of a government mandate,” he told The Washington Examiner on Wednesday.

While apologizing to Harvey, Mulvaney did not back away from his broader criticism of the CBO, noting that Congress’s official scorekeeper had been well off the mark in analyzing ObamaCare in 2010, predicting that 23 million people would obtain coverage under the law’s insurance exchanges by 2016. The actual number was less than 11 million.