The husband of White House counselor Kellyanne Conway, George Conway said that he is pulling himself out of consideration for a Justice Department job. 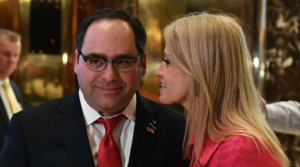 Conway said in a statement that he could not take the job because of the timing, though he was happy to have been considered.

“I am profoundly grateful to the President and to the attorney general for selecting me to serve in the Department of Justice. I have reluctantly concluded, however, that, for me and my family, this is not the right time for me to leave the private sector and take on a new role in the federal government,” he said in a statement.

“Kellyanne and I continue to support the President and his administration, and I look forward to doing so in whatever way I can from outside the government,” he added.

Conway is a partner at the law firm Wachtell, Lipton, Rosen & Katz. He was previously under consideration to serve as the Trump administration’s solicitor general, a role that went to Noel Francisco.