The Office of Government Ethics (OGE) is reportedly set to release copies of more than twenty ethics waivers next week that will enable senior officials to tackle issues related to their time in office in the private sector. 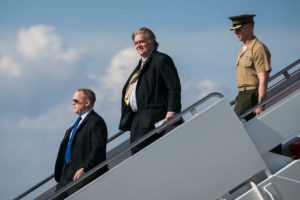 A new set of waivers has been released in addition to the ones approved by Trump’s administration last week. Ethics pledge waivers exempted at least a dozen of White House officials.

So far, OGE has received responses to waiver requests from 135 of 136 agencies, the Wall Street Journal reports. The requests were issued in part to ensure Trump administration officials were abiding by federal ethics rules, which include Trump’s January executive order that required appointees who were past lobbyists, to remove themselves from lobbying activities for two years after they were appointed.

The Government Ethics Office has also promised it will look into a series of undated ethics waivers that were released by the Trump administration this week and which allow White House staff to interact with former clients and employers.

Hence, White House chief strategist Steve Bannon might acquire permission to interact with his former media organization, Breitbart.Trump had mandated an ethics pledge that would keep Bannon from participating in Breitbart-related activities.

But if the waiver was granted after an ethics complaint took aim at Bannon’s discussions with Breitbart editors, the White House could be in violation of federal ethics rules.