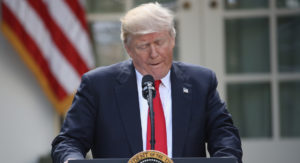 “I was elected to represent the citizens of Pittsburgh, not Paris”, Trump said, drawing support from members of the Republican Party but widespread criticism from global political leaders, business executives and environmentalists.

The Paris Accord was intended to unite the world community into battling climate changes and rise in temperatures on global level, but according to Trump, “he wants to negotiate a better deal for the United States”, and he has already spoken to the leaders of Great Britain, France, Germany and Canada to personally explain his decision.

“The president reassured the leaders that America remains committed to the trans-Atlantic alliance and to robust efforts to protect the environment”, White House official have stated.

The decision is seen as a victory for Steve Bannon, Trump’s chief strategist, and Scott Pruitt, the Environmental Protection Agency administrator, who spent months quietly making their case about the dangers of the agreement. Inside the West Wing, the pair overcame intense opposition from other top aides, including Gary D. Cohn, the director of the National Economic Council, the president’s daughter Ivanka Trump, and his secretary of state, Rex Tillerson.

“It would once have been unthinkable that an international agreement could prevent the United States from conducting its own domestic affairs”, Trump said, adding that the “Paris accord represents an attack on the sovereignty of the United States”.

Nevertheless, business leaders like Elon Musk of Tesla, Jeffrey R. Immelt of General Electric and Lloyd C. Blankfein of Goldman Sachs said the decision would ultimately harm the US economy.