A gunman opened fire on Republicans practicing for a charity baseball game in a Washington suburb, wounding five people, including House Majority Whip Steve Scalise and two members of his security detail, The Hill reports. 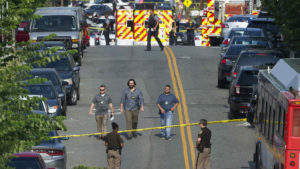 The victims were rushed to area hospitals, where Scalise underwent emergency surgery and remained in critical condition Wednesday evening.

The gunman, identified as 66-year-old James T. Hodgkinson, was injured in a shootout with Scalise’s security team, and later died after being transported to a local hospital.

Republican leaders gathered in the House for an all-members briefing with Capitol Police. They canceled votes and most House committee meetings, as lawmakers grappled with the nation’s latest mass shooting, this one targeting their own.

“We are united in our shock and anguish. An attack on one of us is an attack on all of us”, said Speaker Paul Ryan in a speech.

President Donald Trump later hailed the patriotism of Scalise and the heroism of the Capitol Police officers, while urging the country to seek peaceful solutions to partisan disputes.

“We may have our differences, but we do well in times like these to remember that everyone who serves in our nation’s capital is here because, above all, they love our country. We can all agree that we are blessed to be Americans, that our children deserve to grow up in a nation of safety and peace, and that we are strongest when we are unified, and when we work together for the common good”, Trump said from the White House.

Witnesses said Hodgkinson crept behind the third-base dugout and started firing a rifle, hitting Scalise in the hip. He then trained his sights on others, hitting a staffer for Representative Roger Williams and a Tyson Foods lobbyist, who was hit in the chest and remained in critical condition Wednesday evening.

Representative Joe Barton, who was on the first-base line, where most of the group had gathered, described the events.

The gunman was a member of the Facebook group “Terminate the Republican Party,” an appellation that took on a chilling significance after Wednesday morning, The Hill adds.

Social media activity and letters to the editor show that Hodginkson blamed Republicans for the country’s economic woes, going back to the Great Depression. A prolific writer of letters to the editor in his local newspaper, Hodgkinson railed against income inequality and what he saw as the failed policies of Republican lawmakers.

“I have never said ‘life sucks,’ only the policies of the Republicans,” he wrote in a letter published in the Belleville (Ill.) News-Democrat in the summer of 2012.

From his home in southern Illinois, Hodgkinson showed a firm commitment to liberal politics and a deep engagement with the constant flow of news coming out of Washington.

Hodgkinson also heaped praise on Senator Bernie Sanders, who said Wednesday that the assailant was among the many volunteers who worked for his Democratic presidential campaign.

“I have just been informed that the alleged shooter at the Republican baseball practice is someone who apparently volunteered on my presidential campaign,” Sanders said, condemning the act as “despicable.”

Court records show Hodgkinson had a history of arrests, petty traffic offenses and other interactions with law enforcement that spanned decades, culminating in an alleged domestic battery incident in 2006 during which he was reported to have punched a woman in the face. The case was ultimately dismissed.

Earlier, local sheriff deputies in Illinois met with him after receiving alarmed calls that he had fired off 50 shots on his property, a rural area on the outskirts of town where it is legal to fire a weapon. Hodgkinson had a valid firearm license and officials determined that he had done nothing illegal at the time, a spokesperson for the St. Clair County Sheriff’s Department said.