The Trump administration may restrict the length of environmental reviews as part of efforts to streamline the approval process in the $1 trillion infrastructure package, The Hill reports. 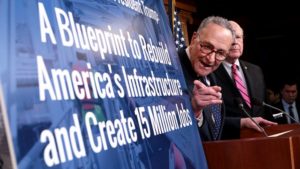 The plan foresees reduction of regulations that could hamper transportation projects, make the lengthy construction approval and permitting process more efficient, and thus bring the timeline from the projected 10 years down to two years.

One idea is to allow steps in the permitting process to occur simultaneously instead of sequentially, and another one is enforcing the page limit restrictions on environmental reports, which, according to Chao, can reach tens of thousands of pages.

“Streamlining the regulatory process not only cuts costs, it can improve the environmental outcomes by delivering infrastructure improvements more quickly. Resources will be spent on actual environmental mitigation, rather than stacks of paperwork”, she added.

Work on the infrastructure proposal has been ongoing for several months, and while the full legislative package won’t be unveiled until later this summer, the Trump administration will start to reveal more details about the proposal in the following weeks..

The package, which will use $200 billion to leverage $1 trillion worth of overall investment through private sector involvement, is expected to address a wide range of transportation projects, including veterans hospitals, energy and broadband.