U.S. President Donald Trump and Republican leaders presented a unified front at the White House Tuesday over his stalled agenda on the new healthcare bill, tax reforms and infrastructure investments, The Hill reports. 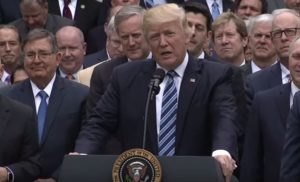 Trump met with Senate Majority Leader Mitch McConnell and Speaker Paul Ryan, discussing the House passage of healthcare legislation and predicting that the Senate “will follow suit and get a bill across the finish line this summer”. He also praised the House bill as a good “concept,” contradicting the criticisms that various Senate Republicans have aimed at the bill.

Once the doors were closed to the public,Trump asked McConnell and his deputy, Senate Majority Whip John Cornyn for an update on the healthcare debate, according to House Majority Leader Kevin McCarthy, who also attended the meeting.

Senate Republicans are continuing to work on their own version of healthcare reform. But besides their commitment to passing a bill, there’s growing doubt that they will be able to bring together at least 50 members of their 52-person conference, The Hill writes.

Trump also discussed his proposal to build a wall along the U.S.-Mexico border, something that the Congress declined to fund in April when it passed its spending bill for the rest of fiscal 2017.

“We had a very good discussion about all the issues we’re dealing with these days”, said Senate Majority Leader Mitch McConnell after the meeting, declining to answer questions about healthcare or former FBI Director James Comey’s testimony scheduled for Thursday before the Senate Intelligence Committee.

According to Republicans,it’s clear the party remains starkly divided over questions such as how to subsidize the healthcare coverage of low-income families and cut the cost of Medicaid.

“We are all cautiously optimistic; that’s the best I can do for you. We want to get this done. It’s a heavy lift”, Republican Senator Jim Risch said after the meeting.

Trump’s incentive for a new infrastructure investment also hit a roadblock Tuesday when Senate Democrats announced they would not support it because it relies too much on private financing.

Senate Democratic Leader Charles Schumer said the plan would only incentivize the construction of toll roads, while underfunding schools and sewers and leaving out rural areas where new highways are less profitable.