U.S. Attorney General Jeff Sessions recently offered to resign because of a rift with President Donald Trump, according to reports from multiple news outlets. 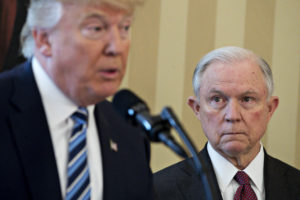 Sessions was among Trump’s earliest and biggest supporters during the presidential campaign — a loyalty that was rewarded by the President with a nomination for the then Alabama Senator to become his chief law enforcement officer.

However, the problems for Sessions began this March, when he decided to recuse himself from any investigations into possible Russian involvement in the 2016 elections, after it was disclosed that he had met twice with the Russian Ambassador to the U.S. last year.

The Attorney General insisted he was acting in his capacity as a senator in those meetings and not as a Trump campaign aide, but nevertheless concluded he should not be involved in any probe related to the campaign.

Nonetheless, Sessions decision to recuse himself from the investigation in March reportedly infuriated Trump. The White House on Tuesday refused to answer whether the President has confidence in Sessions, with press secretary Sean Spicer stating that “he hadn’t discussed the matter with Trump”.

Spicer’s comments came after The New York Times reported that Trump has privately criticized Sessions for his handling of the investigation into Russia’s interference in the 2016 election, as well as the immigration executive order.