Young women gathered on March 30th at the Washington Examiner’s Women Who Lead event to hear from some of the most influential women in Washington.

Kellyanne Conway kicked off the event with an interview with Salena Zito, national correspondent for the Washington Examiner. Conway discussed the path that led her to her position at the White House, expressing gratitude to the many women from across the country who reached out in support, and for the guidance from those in the President’s inner circle. 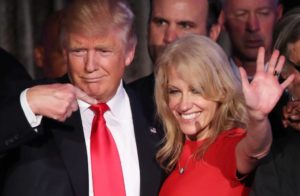 “It was a very personal decision. People kept asking me on live TV what was I going to do,” Conway said. “But I started hearing from women all over the country – mostly complimentary things – and after discussing the decision with my family, the president, the first lady, the vice president and the second lady, I really felt that the best thing I could do was to heed that call and do a tour in the White House.”

After earning her law degree, Conway worked for several Republican politicians, including former Vice President Dan Quayle, before launching her own polling business in the 1990s. The only daughter of a single mother, Conway she said she was surrounded by strong female role models growing up. The mother of four was the first woman to run a successful political campaign; she is now in her third month serving as adviser to President Trump.

“I think women can do it all, just not all at the same time.” Conway said, referring to her various roles as mother, businesswoman, and now Presidential adviser.

Selena Zito also sat down with Representative Diane Black (R-TN); Lara M. Brown, Ph.D. of the George Washington Graduate School of Political Management; and Sarah Chamberlain, President and CEO of Republican Main Street Partnership. The women discussed their various roles in politics and the private sector and offered stories of how they got to the powerful positions they now occupy.

Teamwork was a resounding theme that each of the female panelists emphasized as a key part of each of their successes.

Rep. Black encouraged young women to become experts in their fields in order to have their voices heard in the male-dominated political arena. She also encouraged women to be more creative in working around some of the barriers to running for office, like fundraising and recruiting.

“Jump in.” Was Dr. Brown’s message to the room full of young women. She noted that the Democratic party has a much higher percentage of females holding office within the party; and while Republican recruitment is improving, due to efforts from women like Rep. Black, it is important for women to take the first step rather than wait to be asked.

Sarah Chamberlain and Main Street Advocacy have been working to raise money for women who want to run and their Women2Women conversation tour is designed to recruit more Republican women to run for office. She spoke to the evolution of the male members of Main Street Advocacy and their recent appointment of Rep. Susan Brooks to the steering committee.