It certainly isn’t important in the present scheme of things that President Trump has made a petulant decision not to attend the annual White House Correspondents’ Dinner. His decision upset some of the dinner planners, but he may have inadvertently accomplished a good thing for Washington journalism. 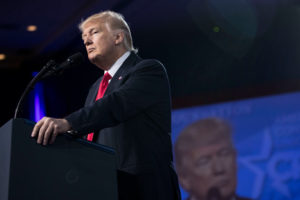 Over the years, presidents have found time, often reluctantly, to attend the glittery, black-tie dinner, inelegantly known as the Nerd Prom. The dinner boasts the good deed cover of raising money for scholarships. It also is an opportunity for reporters to have a convivial evening with people they cover and to have a good time.

In recent years, however, the Correspondents’ Dinner became a showbiz celebrity event with respected media organizations vigorously competing to bring in as many Hollywood and entertainment world celebrities as could be fitted at a table. The dinner probably reached its nadir when reality television stars, like the Duck Dynasty hillbillies were sought after celebrity guests.

And to continue the Los Vegas glitter, a big-name comic emcee was necessary who often wasn’t as humorous as the President who has his speech writers and outside New York/Los Angles talents working overtime coming up with funny lines. And partly because he is the President, he often received the biggest laughs, his jokes dutifully picked up by television the following day.

Having been both a guest and also having covered the red carpet arrivals for television, it was often disheartening to see respected Washington newsmen acting like 13-year-olds catching sight of Justin Bieber.

The more affluent media organizations like NBC, CBS, ABC, CNN, Bloomberg, Vanity Fair host impressive cocktail parties, as do several other media organizations with more shallow purses. The dinner is also a big money raiser for the Washington Hilton where most of the parties are held and where the largest ballroom in town is jammed with as many tables and people that the fire marshal will allow.

It is often argued by journalists that this hot ticket dinner, and the more prestigious Gridiron Dinner (President Trump also declined an invitation to attend), exists mainly to get newsmen and political leaders to get to know each other better and to have a better understanding of the roles of each.

There is some rationality to that reasoning, but conscientious journalists are expected to maintain some distance between themselves and the people they cover. Politicians, by their innate nature can be likable, and it is sometime difficult for a journalist to be tough when necessary on someone you cover and enjoy meeting with over dinner and drinks.

Journalistic organizations are aware of this problem and understand that regular beat reporters can get the good day-to-day stories, but if there is a need to dig beyond the daily news events, it takes a reporter who is outside the news beat structure. The Watergate expose by Bob Woodward and Carl Bernstein is the obvious example where many beat reporters, even at the Washington Post, were opposed to the digging by the young newsmen who eventually brought down a president.

There is no question that the White House is a prestigious beat, but too often the famous newsmen who cover there are more like stenographers taking news information fed to them in press briefings and announcements. It’s a great beat because you get to travel the world with the President and be part of televised press conferences and maybe be seen by people back home.

President Trump, with a greater antipathy toward the press than perhaps even Richard Nixon, has injected new energy into the White House press corps. No reporter there is going to readily accept the often alternative fact information from the White House press office. And that is a good thing. The media and the politicians from municipal governments to Washington, need to have a respected adversarial relationship.

Both sides need to develop a trust for the role each plays and President Trump deciding not to be part of the annual White House Correspondents’ Dinner may be off to a good start. Obviously, the thin-skinned president would not have enjoyed the friendly jibs from the head table speakers and he knew that even the powerful media organizations would have difficulty producing glittery celebrity world guest if he attended and he would be blamed, not that he cared. All one needs to do is look at the paucity of Hollywood celebrities at the Republican National nominating convention in Cleveland.

President Trump wasn’t trying to do Washington journalism a favor, but by not attending the Correspondents’ Dinner, he has. Maybe the dinner can truly focus more on its earlier established roll of promoting responsible, ethical journalism. Good journalism is and should be hard work, and just maybe, a dinner focused on responsible, First Amendment journalism, is a move in the right direction.

This time around, I asked political commentator Bill Press to discuss the presidential debate between Barack Obama and John McCain on October 15, 2008. In a partisan interview Bill Press proclaims John McCain a phony.