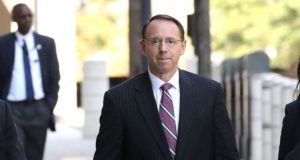 “I did have meetings with Director Comey during our brief period in which we overlapped in this administration,” said Rosenstein, who was confirmed to his post on April 25.

The Deputy Attorney General declined to elaborate on the content of the conversations. The meetings could become a crucial piece of the timeline as the special counsel Robert Mueller probes whether Trump may have obstructed justice by firing Comey, who had been overseeing an investigation into Russian meddling in the 2016 presidential election.

Comey testified last week that Trump had asked him for months to help “lift the cloud” of the Russia investigation from his White House, conversations he concluded were inappropriate given the longstanding independence of the FBI from political considerations.

Comey also said that he raised general concerns about Trump’s interactions with in separate discussions to Rosenstein and Attorney General Jeff Sessions.

Rosenstein last month authored a memo in which he criticized Comey’s handling of the 2016 investigation into Hillary Clinton’s private email server. That memo was used briefly by top White House officials to justify Comey’s firing, until Trump came out a day later to say he fired Comey with the Russia investigation in mind, and would have done it with or without Rosenstein’s recommendation.

In his testimony before a House appropriations committee on Tuesday, Rosenstein refused to say who asked him initially to craft the memo used to justify Comey’s firing.

“I am not at liberty to talk about that now,” Rosenstein told the committee, noting that the matter might be a component of Mueller’s probe of Russian meddling in the 2016 presidential election.

Asked after the hearing whether he ever relayed Comey’s concerns about his talks with Trump to others in the administration, Rosenstein told Politico that he wouldn’t discuss the subject, declining to comment about whether those interactions had become a part of the special counsel’s probe.

Days after Comey’s firing, Rosenstein appointed a special counsel, former FBI director Robert Mueller, to continue the Russia probe and prosecute any associated crimes that may have been committed. The deputy Attorney General also emphasized that he’s seen “no cause” to terminate Mueller and wouldn’t do so without a reason, even if ordered to by the president.

Rosenstein testified on Tuesday at the same time Sessions was testifying on the other side of the Capitol before the Senate Intelligence Committee on a related subject.