Senate Minority Leader Chuck Schumer on Sunday invited President Donald Trump to testify before the Senate on his campaign’s alleged ties to Russia. 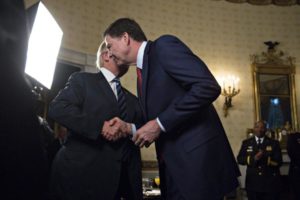 “I think we could work out a way that it could be dignified, public, with questions, with Senate Republican Leader Mitch McConnell,” the Democratic senator from New York said on CBS “Face the Nation”.

He added that senators would consult with Special Counsel Robert Mueller, who is heading up the Justice Department’s investigation.

Earlier, Senator Jack Reed said on “Fox News Sunday” that Trump’s testimony before Congress would raise “the issue of separation of powers”, but he said Mueller should depose the President at some point in his investigation.

On Friday, Trump said he was willing to testify under oath about his conversations with former FBI Director James Comey.

The ex-FBI chief appeared before the Senate Intelligence Committee on Thursday for the first time since he was fired in the midst of an ongoing investigation into Russia’s alleged interference in the 2016 presidential election.

Comey accused Trump of trying to block an investigation into ties between former national security adviser Michael Flynn and Russia, adding that the White House defamed him and the FBI in order to justify his firing.

Both Trump and Russia have denied allegations of meddling in the 2016 election.