A top U.S. diplomat in Beijing resigned on Monday, a move that was triggered by President Donald Trump’s decision to withdraw the country from the Paris climate accord, sources have told Politico. 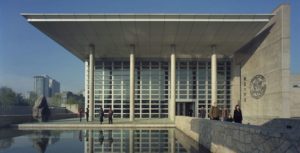 A State Department spokesperson confirmed that David Rank, the Beijing embassy’s chargé d’affaires, had resigned, citing only “a personal decision”.

But a former State Department official familiar with the situation, confirmed reports that Rank’s departure was related to Trump’s decision to exit the Paris climate agreement, Politico reports.

Rank, who during his 27 years at the State Department has also had postings in Afghanistan and Pakistan, publicly informed his colleagues at the embassy about his departure, according to John Pomfret, an editor for the English-language China news aggregator SupChina and author of a book on U.S.-China relations.

“Rank called a town hall meeting @USEmbassyBJ to say he could not deliver a demarche to the PRC govt over U.S. withdrawal from @ParisAgreement,” Pomfret tweeted.

Using a town hall to announce a resignation is unusual, said Brett Bruen, a retired State Department veteran who served as Director of Global Engagement in the Obama White House.

“I started as a diplomat under George W. Bush. Many in the Foreign Service had issues with the Iraq War. A couple officers resigned over it. Yet, for those who stayed our views were always expressed in low whispers — not at a town hall. Such a move shows the level of utter disdain for Trump and his policies by senior American diplomats. They face the brunt of the blowback from our allies and have to contend with the advantages it offers our adversaries”, Bruen said.

Trump announced last week that he would pull the United States out of the Paris climate agreement, the 2015 pact signed by more than 190 countries and designed to combat the emissions of greenhouse gases and adapt to rising sea levels and temperatures. The U.S.President stated he would seek to renegotiate a more favorable deal for the country though several European leaders have already dismissed the notion of the reopening talks that led to the agreement.