Retired generals and other senior military officers are warning that the U.S. must be a leader on energy innovations, noting that a “failure in the field could cause considerable risk to national security”, The Hill reports. 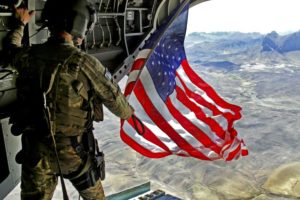 “As new energy options emerge to meet global demand, nations that lead stand to gain; should the U.S. sit on the sidelines, it does so at considerable risk to our national security,” CNA’s Military Advisory Board wrote in a report released Tuesday.

The report has been prepared since 2015, but its release comes following President Donald Trump’s decision to pull out of the Paris climate agreement. In an interview with The Hill, three of the report’s authors resisted comparisons of their results and recommendations to argument against withdrawal from the Paris Agreement.

“We started this report before Paris occurred. It looks at trends over the last 15 years, and our projections are for a decade or two to three. We think this transcends Paris and administrations and is really for a longer view”, retired Capt. Captain Leo Goff said.

Thus, the group of retired officers has said that rising energy demands will change the geopolitical landscape. The document states that so far, the United States has not stepped up to be a leader on what the report terms “advanced energy,” which it defines as nuclear, hydro, renewable or alternative power.

The United States has fallen behind China and the European Union, retired Vice Adm. Lee Gunn underscored. “We don’t think that’s where we should continue to be”, he added.

Moreover, the report argues that leading would help the United States maintain its competitive advantage against countries such as China and Iran. Further, using advanced energy in the US military could help with effectiveness, reliability and costs.

“The military philosophy on employing advanced energy technologies is simple: Use them when they improve the effectiveness or resiliency of military operations. Advanced energy systems can accomplish this for our warfighters in forward operations and installations by lowering vulnerable logistical requirements, extending missions by reducing the need for fuel resupply, and lowering the number of combat forces needed to protect fuel supplies”, the retired officers wrote.

According to the report, the United States should take a leadership role in the transition to advanced energy, thereof the government should create a comprehensive energy plan and that the national defense strategy should further include the national security challenges of a changing energy landscape, among other recommendations.