Republican congressman Clay Higgins said Sunday that any “radicalized Islamic suspect” should be hunted down and killed. Higgins, a viral YouTube star who was elected to Congress last November, in a Facebook post argued that “Christendom is at war with Islamic horror”. 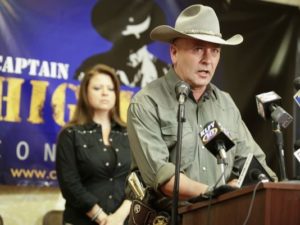 “Their intended entry to the American homeland should be summarily denied. Every conceivable measure should be engaged to hunt them down. Hunt them, identity them, and kill them. Kill them all. For the sake of all that is good and righteous. Kill them all”, Higgins wrote.

“Not one penny of American treasure should be granted to any nation who harbors these heathen animals. Not a single radicalized Islamic suspect should be granted any measure of quarter,” Higgins added in the post.

“The free world… all of Christendom… is at war with Islamic horror”, Higgins wrote, as a reaction to the recent attacks in London that left seven people dead. The Islamic State in Iraq and Syria claimed responsibility for the attacks on Sunday.

It was unclear from the post how, exactly, U.S. authorities should go about identifying any “radicalized Islamic suspects” trying to enter the country. Moreover, it was also not clear how he thinks ordinary Americans ought to identify suspected radicalized Muslims before killing them ― which, incidentally, would be murder, which is illegal, The Huffington Post comments.

A spokesman for Higgins did not respond to a request for comment. Higgins, known to some as the “Cajun John Wayne,” used to host a weekly crime show on local news where he referred to suspects as “animals,” “thugs” and “heathens.” He eventually quit the police force, insisting that he was leaving because of his devotion to Jesus and that he was not being forced out over his comments on the show.