Chicago Mayor Rahm Emanuel, one of the architects of the last Democratic takeover of the Congress, played down the importance of the 2018 midterm elections, stating that the party’s long-term problems run far deeper than whether Democrats can win back the House. 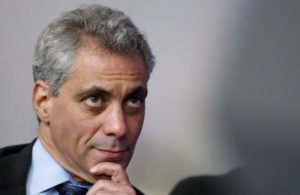 According to Emanuel, the Democrats had lost so many seats across all legislative bodies that party leaders will need to rebuild from the ground up to create a sustainable majority on Capitol Hill.

“What I disagree with is an approach that assumes it’s only about one election. We’re down, over the last eight years, about 1,100 Democrats. You’re not going to solve it in 2018. So the question is what are we doing about state houses? What are we doing to recruit candidates to run for other types of offices at a local leve?”, the Chicago Mayor said.

Emanuel’s comments come amid growing hopes that Democrats will be able to ride a wave back to the House majority, based on the energized liberal activism in the wake of President Donald Trump’s win last year and better-than-expected showings in a trio of special elections for House seats this spring. Some are pointing to the 2006 elections, when Emanuel chaired the Democratic Congressional Campaign Committee and recruited dozens of candidates across the country.

Moreover, they won 30 seats during those midterms and won back the House majority for the first time in 12 years. Democrats will need a net gain of 24 seats next year to win back the House, and they are focusing on 23 districts that Hillary Clinton won in last year’s election and a dozen more where Trump won by less than four percentage points.

Emanuel, who spent three terms in the House last decade representing the northern end of Chicago, had recently come under criticism by some liberals for seeming to reject any chance of the Democrats winning back the House next year in the midterms.